The Allure Of Volatility - Charts Edition

The geopolitical tensions from Russia’s aggression into Ukraine have created a backdrop of tremendous hardship for the Ukrainian people and it remains highly ambiguous as to the continued timeframe of such an unprovoked attack. The response to Russia has been immediate and global in nature. Sanctions tied to the Russian banking sector, as well as that of the corporate sector, have generated concerns within the Russian economy and we’re starting to see the early stages of a private-sector coalition urging the Russian government to consider peace talks. It’s likely that this is a ceremonial attempt – at best – when considering the aggressive fighting that is still taking place in Ukraine.

Global capital markets have also exhibited tremendous angst at the events occurring in Ukraine as investors are attempting to decipher daily news as a means of gauging risk appetite. The reality is that a war in any part of the world is going to cause a certain level of risk-off appetite in the short-term. That’s simply a function of uncertainty that quickly becomes a manageable risk, or some form of it. The global impact from the current war is one that remains fairly concentrated on commodities and likely less so on aggregate capital markets. Moreover, our approach to assessing the near-term, or the sustained, risk from current tensions is a function of gauging consumer health and their propensity to consume. This becomes notably more important in the current post-COVID demand-pull inflationary environment. We wholeheartedly understand the turmoil in Ukraine will generate a continuous news cycle focused on the events---and rightfully so. The impact on economic growth and consumers, however, should not be deciphered in a similar somber tone. We remain optimistic on equity market participation and stand ready to actively partake in the current volatility, most of which may not be entirely over quite yet.

We are showcasing our optimistic stance with numerous graphical presentations this week because the ability to visualize the potential for sustained (or neutral) growth remains in our favor. 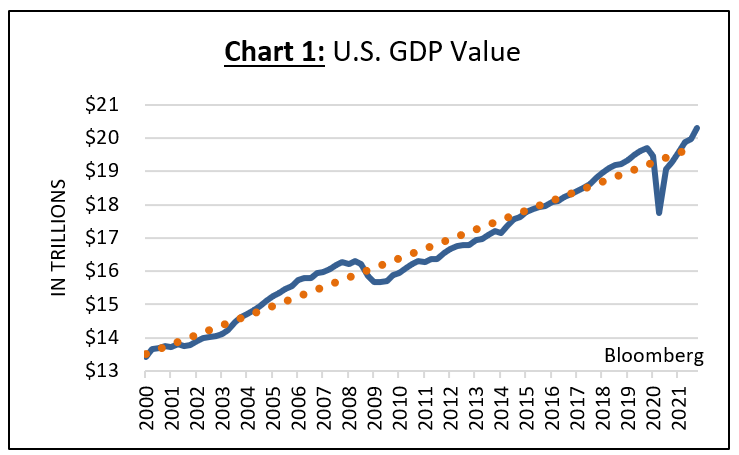 Our first chart is an initial view of the aggregate dollar value of U.S. gross domestic product (GDP). The simplistic nature of Chart 1 is one that provides a long-term perspective on the need to forego a short-term turmoil mindset. All investors have likely embraced the notion that being long-term oriented may likely produce a better outcome than attempting to react to short-term news. Understanding and abiding by such an adage can be very difficult. The chart to the right, however, provides a working and visual example that failure to remain invested across numerous economic business cycles is likely detrimental to long-term success. It never feels as such at the exact moment in time, but the reality is notably more welcoming. In fact, when forcing ourselves to not only accept that short-term risk is just that (short-term), but also that the ability to gauge and predict market and economic movements is a futile process; we force ourselves to become more ingrained with the reality that the current environment is not likely the future of the next six, twelve, or twenty-four months. 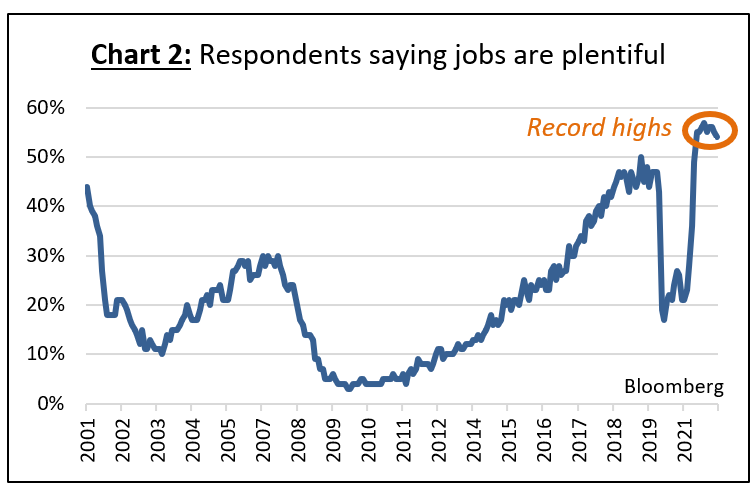 Our second chart for this week is yet another representation of the economy via the labor market. It’s also something that can help explain the current trend of inflationary pressures. Chart 2 depicts data from the Conference Board Consumer Confidence survey outlining the share of respondents who believe jobs are plentiful in the economy. This information will not come as a shock to many investors when considering the immense supply chain issues that have been evident due to a lack of labor capital. One explanation as to why we’re seeing such an immense void has to do with pandemic-influenced accelerated retirements. In late 2021, Pew Research reported that “between 2008 and 2019, the retired population ages 55 and older grew by about 1 million retirees per year. In the past two years, the ranks of retirees 55 and older have grown by 3.5 million.” What this means is that the immense consumer demand for goods and services, both during and after the depths of the pandemic, was also met with a surge in retirement. The remaining supply of skilled labor to satisfy such a retirement void has now created a salary war between employers in attempting to steal talent from each other. As a result, discretionary spending has been further bolstered by rising wages in a way that few thought possible. We believe this will normalize over the next 6-12 months, but it will likely occur against the backdrop of sustained inflationary pressures. Worse things could be possible, such as a scenario of rising inflation and stagnant wages, and careful consideration should be placed in assessing the impact of the current environment. 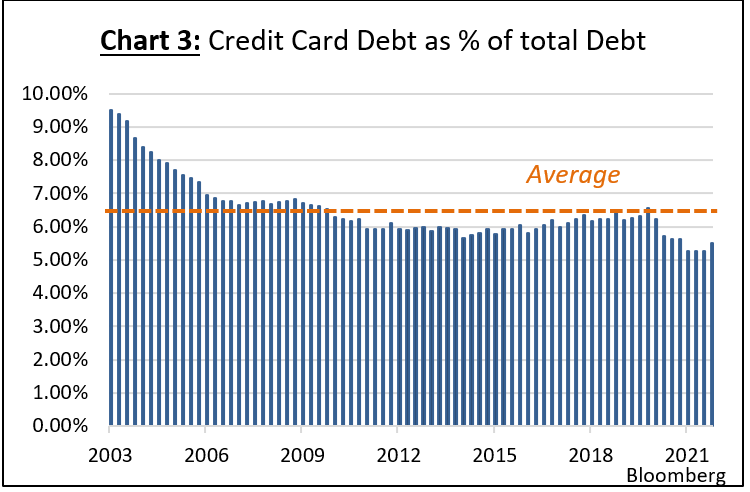 The impact of unforeseen higher wage growth across the economy has not been lost to the health of the consumer. Demand has been rampant across the board, yet it has also generated an appropriate fiscal response on the part of consumers. This is not something that always materializes in this unique manner. Chart 3 provides an attribution of credit card debt as a function of consumers’ aggregate debt. Things like mortgages, car loans, student loans, and credit card debt are some of the components that make-up total household debt. From a consumption of goods standpoint, U.S. consumers remain in a very fiscally healthy position as it relates to their propensity to leverage themselves, at least through this one measure of revolving debt. When assessing total debt, however, as a function of disposable income, we continue to see appropriate fiscal management across all facets of debt. There is at least the ability to sustain such debt without the risk of added pressures like those evident in the Global Financial Crisis. Data from the Federal Reserve – through the second half of 2021 – indicated a sustained historically low level of total household debt relative to disposable income. Consumers’ ability to voluntary quit their jobs in search of higher paying positions has been a tremendous factor in this occurrence. As a result, we have seen inflationary pressures push prices higher amidst an appropriate demand-pull backdrop.

As a point of reference on wages, Chart 4 provides an overview of the tremendous upside we have witnessed over the past few years. Apart from the COVID-driven extremes, the current wage growth data, through January 2022, remains notably above trend and has been a function of a tight labor market the likes of which we have not witnessed in decades. In fact, based on the current record-high voluntary quit rates, we would make the argument that the labor market has never been this tight. The path forward is likely to remain as is through at least mid-to-late summer, and the consequences tied to inflationary pressures are likely to remain intact because of these wage pressures.

Of the four previously outlined charts, Chart 5 below remains by far the most interesting and provides a detailed overview of a tremendous forward-looking opportunity. From a first glance, the chart – through February 2022 – depicts a somber snapshot as the current sentiment data remains near the same levels as that of the worst financial crisis since the Great Depression (referring to the 2008-2009 financial crisis). We find ourselves questioning this phenomenon. How could we be witnessing record positive fiscal health on the part of consumers, coupled with tremendous job availability, amidst a dismal sentiment backdrop? The answer can certainly be complicated, yet the objective nature of such an answer does not support the data in Chart 5. We would argue that current sentiment data is wrongfully biased by inflation data that is largely misunderstood and has generated an unwarranted fear factor. We maintain an optimistic overview of consumer sentiment data that is driven largely by fiscal health, strong disposable income, and a balanced approach to household debt management. As supply chains further improve throughout the year, we believe sentiment data will be the first to improve and may drive yet another secular cycle of earnings growth across equity markets.

The recent developments in Ukraine have certainly added to the angst of sentiment, yet geopolitical developments are likely to do little to derail consumption trends. Except for potential short-term demand deviations in Europe, we believe the aggregate impact on the world is likely to remain minimal, with the biggest impact potential remaining concentrated to commodities (such as oil). Chart 6 provides a broad overview of Russia’s impact on World GDP. It certainly remains marginal, and has declined post the latest geopolitical debacle, yet it’s impact on oil supply should not be underestimated as a short-term shock. As of now, Russia exports roughly 6.5 million barrels of oil per day (Department of Energy). Approximately 2 million make their way to China, another 2 million to Europe, with the remainder coming mostly to the United States. Domestic energy independence can become reality post this latest geopolitical event, but it must become a political priority to avoid unforeseen price swings. This is largely a reason why the U.S. has yet to sanction the Russian energy sector and is not likely to do so until a definitive void for the 2 million barrels/day becomes available.

It’s also very important to note that Russia maintains low reserves of U.S. treasuries, which makes this geopolitical risk more currency-related. This is a main reason why Russia has restricted currency translation away from the Ruble for its citizens, which is yet another reason for the aggregate geographic concentration risk to this conflict.

To conclude this week’s commentary, we want to stress [once more] the need to maintain, or increase, equity market participation amidst an environment that does not immediately change long-term economic and market expectations. The global economy maintains a low risk for prudential issues, the financial sector remains well capitalized, and aggregate consumer demand is being appropriately driven by higher disposable income and better debt management. Inflation data will continue to dominate headlines over the next six months, but consumers must recognize the appropriateness of such an outcome. It remains demand driven through a function of a tight labor market and increased wages, both of which are positive. Supply chain issues have exacerbated the inflationary backdrop, as will recent geopolitical tensions, but the long-term impact remains one that favors a long-term investment approach. We urge objectivity and a challenge to the status quo.