Are thoughts more important than actions? Or is it vice versa? There is an underlying belief that our thoughts guide and influence our actions both at home and at work. Such thoughts can also provide a tremendous backdrop on how we manage our financial lives, especially as it relates to maintaining, decreasing, or increasing our discretionary spending, saving, and investing. On the latter, it is the short-term accumulation of such thoughts that generates a quantifiable dichotomy between our willingness, and ability, to accept a certain level of risk for the benefit of long-term benefits. The simple idea of consumers’ thoughts, or their general sentiment, is so important in the economy that economists utilize it to generate consumer sentiment and consumer confidence indices. Many of you have likely heard of the University of Michigan Consumer Confidence survey, or perhaps of the Conference Board Consumer Confidence index, both of which attempt to track the thoughts, feelings, and sentiment of consumers. Ideally, such data may generate a forward-looking capacity in predicting retail sales, car sales, manufacturing activity, and much more. There is no perfect science to it, but it does provide a general guiding principle. As is the case with all things in life, however, moderation in utilizing such indicators bears tremendous relevance. Economic data over the previous few weeks has provided a tangible lesson on the topic of gauging activity, and economic health, via sentiment indices.

We recently learned that consumer sentiment data revealed the lowest reading in a decade. Such information was published a little less than two weeks ago and was announced less than a week prior to the latest October retail sales report. The anticipation for retail sales was nothing short of dismal following the sentiment data because it suggested consumers’ fearful thoughts about the economy would have turned into more saving, not spending. After all, conventional wisdom continues to suggest that concerns about inflation are continuing to dent confidence and the willingness, and ability, to consume. The sentiment report highlighted risks that suggested pandemic-related supply chain issues may evolve into something grander throughout 2022. This is certainly possible because we may very well see the Consumer Price Index (CPI) above 4% through at least June 2022. This will likely occur amidst an unwavering consumer demand profile and a continued supply crunch. The upcoming holiday season will provide us with notably more granular data to be able to adjust that thinking, yet we do remain optimistic. More to come on this through year-end.

On the retail sales front, however, we learned that October retail sales rose by 1.7% and surpassed economists’ estimates by a healthy margin. To provide some clarity to that figure for the math buffs, the standard deviation of estimates among economists was 0.61% for the latest data and the actual figure was 1.7%. Stated differently, the massive dispersion of estimates from economists indicated that they had no idea how to decipher the latest sentiment report as it relates specifically to what people will do versus what they say. This is yet another critical example of the theme that we have been discussing since June 2020. Attempting to build capital market expectations in the current environment, as a means of gauging equity market participation and economic activity, is a futile process. A certain group of economists will argue that the moral of this story is to always watch what people do rather than what they say.

The difference between the sentiment report and retail sales can also be further quantified through corporate earnings. We view it as an indirect way of gauging consumer health amidst what has transpired in the current demand-pull inflationary environment. Walmart and Home Depot reported earnings last week and below you will find their gross profit margins (Chart 1). Are there any visible issues with their ability to sustain peak profitability while maintaining healthy margins amidst an inflationary environment? The answer is obviously no because their adjustment to higher prices has been supported by consumers. This is an objective example of how 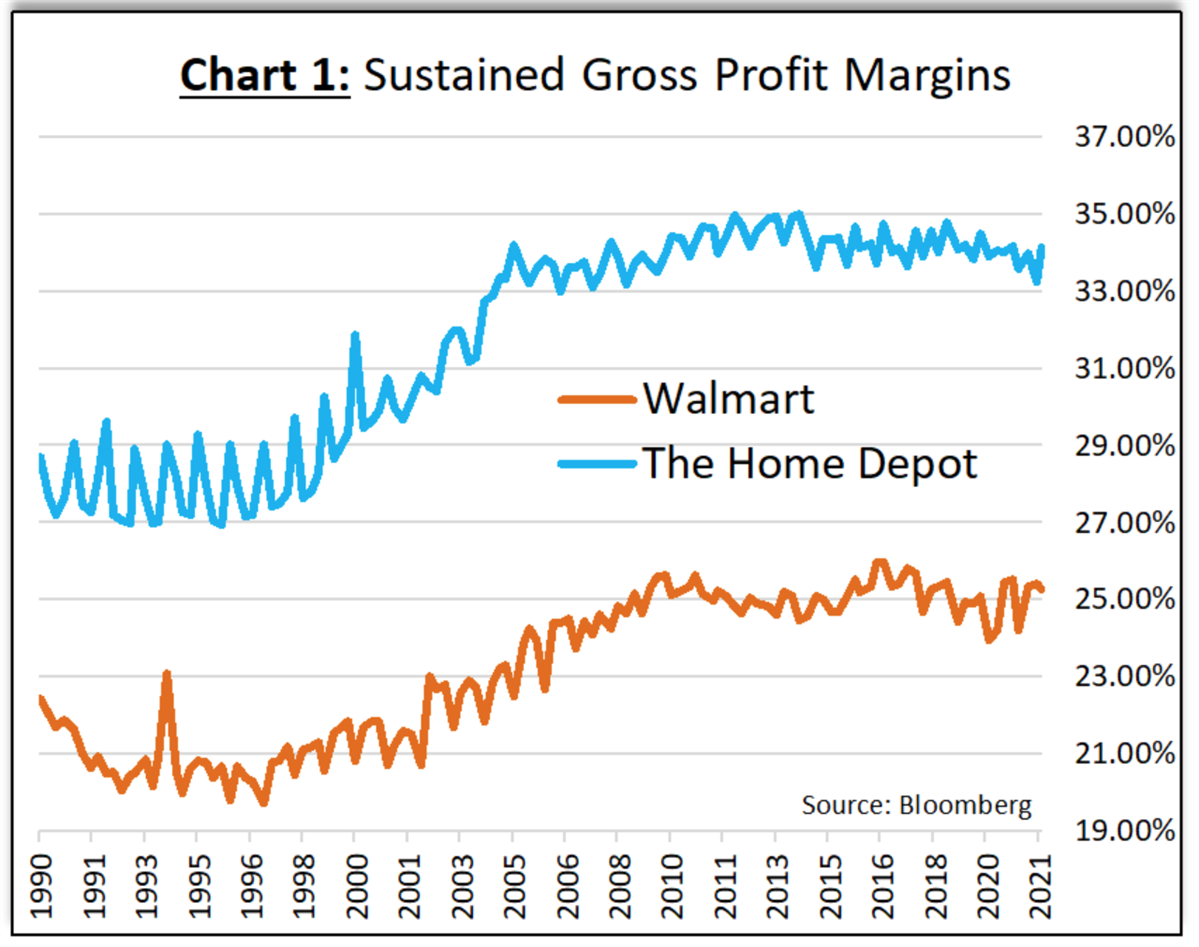 the current consumer base is financially healthy and willing to spend; yet they may be weary of inflation, with how they decipher their viewpoint on the economy (i.e., thoughts and feelings). Inflation is not going away, but we’re operating in a demand-pull inflationary environment that tends to be more productive than a cost-push environment. This may not be the case six months from now, but it is what we’re observing in the current environment. We must be cautious in attempting to extrapolate economic data points that do not directly provide a basis for absolute consumer spending and consumption. We believe all other factors remain highly subjective in the short-term. Moreover, it’s important to note that the notion of inflation – for now – should not be thought of as the two-headed monster that it is perceived to be. Inflation creates a propensity to bring forward consumption and investment because of the higher economic cost of saving. The belief that inflation may be higher in six months may spur more spending now. This may create a void in six months, yet such a timing buffer provides ample policy action that can help mitigate shortcomings.

Lastly, as we look out to year-end, we’re optimistic on the topic of manufacturing and labor, which are two critical components that can support the continued economic expansion post-COVID. Data from the Philadelphia Federal Reserve Manufacturing index revealed that both the current and forward-looking indicators for new orders and shipments rose, which reveals that demand for manufactured goods is strong and is expected to expand. In particular, the new orders-to-inventory ratio increased, which is a sign of robust growth ahead. None of this is to suggest that supply chain issues will resolve anytime soon, but it does foreshadow a backdrop on consumer actions that remain supportive of economic growth and sustained corporate earnings. Improvements in the labor market are also supportive of such a theme. In fact, relative to September’s labor market report, the latest October data reveals a backdrop of continued job creations within the segments of the economy tied to leisure spending and the aggregate economic reopening trade. Figure 1 below provides a relevant perspective on the optimistic trend of the labor market. Although labor shortages will not lapse, the pressures of wage growth may likely provide an ample reason to attract workers. 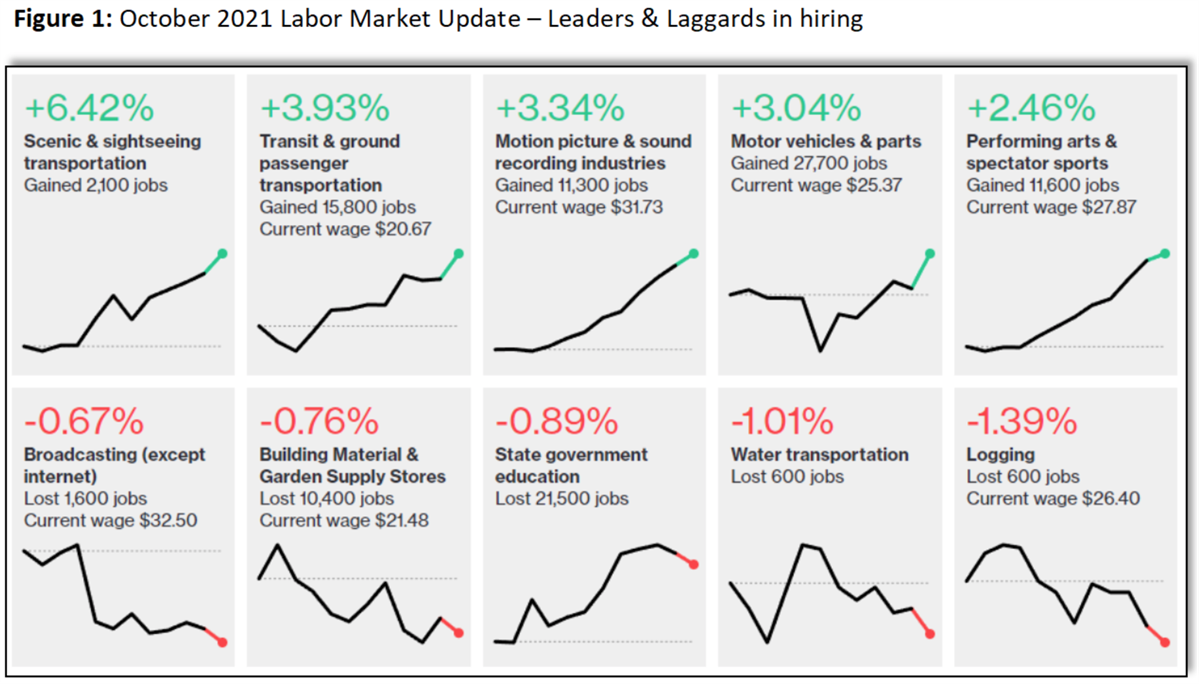