The topic of inflation continues to dominate headlines and it appears to be largely misunderstood, or perhaps misguided on why we’re seeing short-term inflationary pressures. It’s important to first acknowledge the fact that inflation can often generate a notably more positive economic backdrop than that of a deflationary environment. Inflation promotes innovation, corporate capital expenditures, and it can often reshape the labor market for the positive. Not to mention that it has been historically associated with gains across risk assets, such as stocks. The United States, along with much of the developed world, has failed to see inflation sustained above 2% for an elongated period. In fact, over the 10-year period that ended in December 2020, the average monthly Consumer Price Index (CPI) equated to 1.7% amidst an environment where the Federal Reserve was attempting to reach 2%, or higher. When considering the current CPI data in the mix (through September 2021), the average 10-year figure shifts marginally higher to 1.8% and it supports the notion of a normal cycle. It’s one that can often carry cyclical shifts in higher, and lower, inflationary pressures over varying time periods. Of course, the notion of a normal long-term cycle never feels normal in the short-term because the headline shock, and the observable price swings, provide for an emotional and short-term financial disruption. As that occurs, we must attempt to build an objective overview of whether the short-term inflationary environment is justified and when it is likely to subside. Let us explore the current dynamics.

From a purely economic standpoint, the impact of COVID was short-lived in a way that no one imagined possible. The severity of market declines, labor market disruptions, and halted demand appear anticlimactic in the rearview mirror. Not only have businesses of all types made major investments in their people and processes over the past 18 months, but the general health of such businesses, and consumers, remains at historically positive levels. Data from the Federal Reserve Bank of New York indicates that everyone from banks to households to businesses is swimming in cash. From a portfolio management standpoint, such data indicates that the propensity to consume remains intact given the enormous amount of dry powder available to support economic activity. This is a distinct delineation because it helps ease a critical question going into 2022; will the current supply issues turn into demand issues capable of halting economic and market gains? We adamantly believe the answer is no due to the immense lack of objective and quantifiable data to indicate otherwise. This does not mean that we’re not likely to see a slower 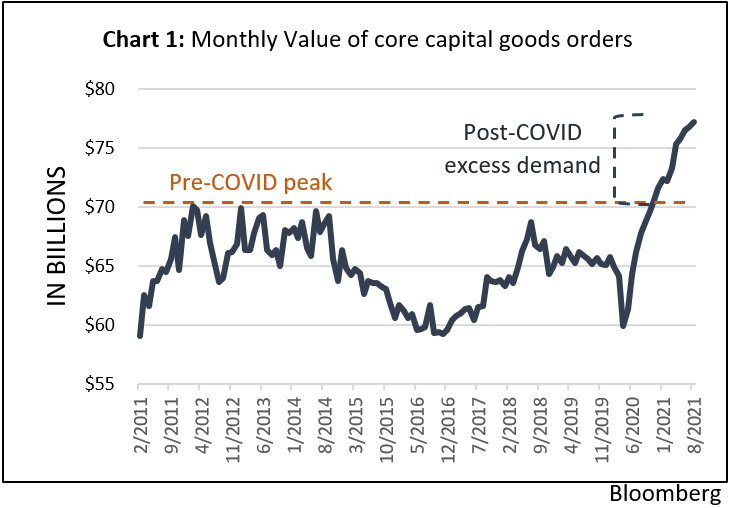 rate of growth – that should be expected – but it does likely provide for a backdrop of sustained gains amidst an inflationary cycle that may last through mid-2022. One observable example of sustained gains/growth, within a slowing growth cycle, can be seen in capital goods orders, which account for things such as tools, machinery, vehicles, computers, and construction equipment. Chart 1 provides a tangible view of pent-up demand post-COVID. It showcases the lack of sustained risks that remained evident during the early part of 2020, and it further provides justification for current appropriate short-term inflationary data. In other words, the simple fact that we can pinpoint the catalysts of higher consumer prices, and that of energy costs, is a notably more positive occurrence than operating in a black box of inflation uncertainty. When we couple this phenomenon with the observable short-term issues in the labor market (which we believe will resolve over the next 6-12 months), along with the cash on the sidelines, then the argument for an above average economic year in 2022 becomes more viable.

The concept of viability, and inflation justification, has also become apparent in the corporate earnings season thus far. Through Friday, nearly 25% of companies within the Standard and Poor’s (S&P) 500 index have reported earnings with an aggregate earning growth rate of 45.68%. This has occurred amidst a backdrop of labor shortages that has resulted in higher wage growth and higher unit labor costs for corporations. Stated differently, the nearly 46% earnings growth has not only surpassed analysts’ estimates, but it also considers the higher wages that corporations are paying for labor. This is critical to understand because it indicates a positive response to inflationary pressures from the consumer front. The higher price of goods, which occurs because of higher raw costs to corporations, is not being shunned away by consumers. As a result, we remain convicted to the idea that equity market participation may likely surpass the gains of the bond market next year. The extent of such performance may not be as impressive as the gains in 2021, but the likelihood of a positive spread contains quantifiable evidence that is difficult to ignore.